How I once met twenty amazing young Europeans.

As a child, have you ever been waiting for Christmas very much because you wanted a certain gift you wished for really badly? And than, when Christmas came you did not get what you wanted but something your parents considered more useful? And than again, have you ever grown to like the other present way more then whatever shiny thing you wanted to have?

Well, I was this child a few days ago in Rome.

When I won the EFS competition I was very excited about the chance to interview Mister Schulz. If at all, I wasted very little thoughts on the other participants of the event. When I thought about the interview before going to Rome I imagined it more or less to be like the interviews I had in Brussels a year ago. Just that this time I’d be more knowledgeable and it would be live in the internet and on TV, so no more vague politician-talk!
What an illusion…

But one thing a time. Before the interview, I went to Rome of course. There I met the other participants. Even though I didn’t meet a former Belgian Prime Minister on my flight to Rome, I experienced many things similar to Adam. Adam is a 18 year old student from the UK and one of the 20 other winners from all over Europe. He described the interview itself and more important our time in Rome very beautifully and detailed on his blog. Have a look at it.

So, after the first evening of getting to know each other and enjoying pizza at an Italian restaurant, we met to prepare the questions for the interview on the morning of the 28th.

There I started to realize how wrong I was about the interview when a smart girl from Lithuania asked whether there would be follow-ups allowed. Since we were 20 participants and Mister Schulz had one hour time each of us had the possibility to ask only one question. To make sure everybody would have time for this one question it wouldn’t be possible to follow up questions, explained us Bjorn. Bjorn was our moderator for the talk later and also helped us to prepare the questions. After the interview I was asked several times if we could have asked whatever we wanted to. The answer is yes. No one tried to influence our questions or judged them. Actually, we had a (okay not so serious) discussion before the interview about the question whether Martin Schulz would prefer a duck sized horse or a horse sized duck (good question, think about it!). It would have been very possible to ask this or any other, maybe slightly more serious, questions we had.

And indeed some of us had brilliant questions.

“In case of a systemic crisis in the next 10 years the resolution fund of the Banking Union could barely bailout one or two moderately-sized banks. So what measures will be taken in case of a crisis? And will they be effective?”, was the question of the same smart girl who was the first to notice the problem of the follow-ups. And when Calum from the UK came up with a superb question about how to change the European identity into a less elitist thing, I almost jumped of my chair for joy. Being in the workshop where we collected our questions felt like watching a firework of great ideas. We had questions about the independence of Scotland and Catalonia, we had questions about the conflict which would be created if Martin Schulz becomes both, the president of the European Parliament and the European Commission. We collected questions about foreign policies like the role of Russia in Ukraine, the Swiss referendum or the NSA. About youth employment, voters participation and the lingua franca of the EU. Questions I wish I would have come up with last year in Brussels.

Can you see that firework of ideas? I can!  Plus of course Bjorn, our moderator

But what helps the best question if it can be answered however somebody pleases?

A few hours after the firework of great ideas we all sat rather nervous on white bar stools and waited for Martin Schulz. While waiting I fought the almost uncontrollable desire to try how fast the bar stools could spin and if one could stay seated while spinning as fast as possible (that’s a noble alibi for the fact that I almost fell of the chair several times. Just in case you were wondering while watching the livestream). As soon as Martin Schulz entered he gave the perfect show. He is a really skilled politician. He made the audience laugh, seemed to be really likeable and answered all of our questions with passion. The one hour he stayed he made us feel like we were the most important date today and our questions really valuable.

But he was also very vague and diplomatic. He’d answer questions with anecdotes and sometimes seemed to talk to the television cameras instead of us. All in all, when the hour was over I felt like I took part in an election campaign for Martin Schulz rather then an interview. 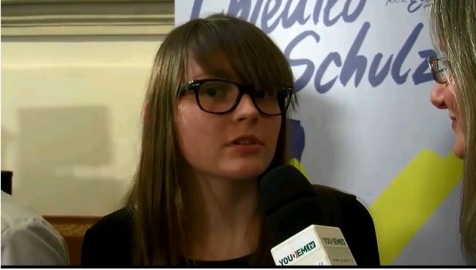 If you click on the picture you’ll get to a really nice video of the event with focus on the participants. Btw these weren’t our posters. I think they were made from an italien party. Uh-uh.

I don’t think that’s somebody fault and probably I was just really naïve in expecting differently. Maybe it would have been different if it wasn’t election time right now, if Martin Schulz didn’t have a few little scandals lately with being too direct or if we would have had more time or no cameras. Anyways, let’s don’t concentrate any longer on that shiny thing I wanted to have so badly but rather on what I really got: 20 amazing young people.

Sometimes my project has been an exhausting haunt for people with a vision for Europe or life in general. And here comes the Friedrich Ebert Stiftung and serves me this people on a silver plate. Couldn’t it be any better?!

Yes it could. On top of being brilliant and having great visions all of the other winners were extremely nice and for just spending two days with them I feel really close to them. I’m sure our time in Rome could have been way longer and we would still would have had enough to talk about. Every small break was filled with passionate discussions (well, to be fair the English people were a little over-privileged here and probably talked therefore a little more then others). What made the group so interesting were our different backgrounds. There was a rather conservative British guy, two social democrats from Italy and people who don’t belong to any political spectrum. One of us is in his second master program while others are still in high school.

I used the only longer break we had to read most of the other submissions for the competition. They are as different as we are and I personally consider them way more interesting then the interview with Martin Schulz. That’s why I decided to upload a few to my blog and do little interviews with some of the other participants. I’m sure you’ll be as excited about them as I’m.

Even if my conclusion now is somewhat critical I’m still extremly grateful to the Friedrich Ebert Stiftung and especially to Kristina for organizing the event.

1 thought on “How I once became an involuntarily campain aide.”