Despite all the traveling – I’m still a city girl, I’ve never spend even one night alone in the nature. I’ve done hundreds of kilometers of hitchhiking, but real hiking?

It’s something I wanted to do for a long time: going on a hike on my own. A challenge. Testing my physical limits and spending a night completely on my own in the forest.
Slovakia gives me the best oppertunity to do so. Wherever I go I’m surrounded by mountains. Some are still snow covered (a fact I should have thought about twice) but most are green with blossoming spring forest.
I got a tent and a map from my amazing hosts in Žilina and supplies for a few days in a supermarket. Off I was to the Mala Fatra Nature Park.

I started hiking in a little village. It was a cloudy day but no rain so far. The path led me steep uphill. The higher I got the less I could see. Soon after everything was covered by rather cold, wet fog.

No, that doesn’t look like a Grimm-Fairytale Forest. Nor like the Forbidden Forest in Hogwarts. I’m very sure no Dementors will appear behind the next tree.

My plan was to follow a marked hiking-trail until a moutain top where I would find, so the map told me, a little hut. I planned to stay there for the first night and sleep in the tent for the second night.
After a while it became harder to follow the path since I couldn’t see enough to discover the marked trees. Everything was just grey.

I got lost several times. Usually, I noticed I was wrong when I went downhill instead of uphill. At some point the city girl started to think: At what time does it get dark? 5pm?  Is dawn earlier or later in the mountains? And why didn’t I think about stuff like this before?!
By now my phone didn’t get any signal anymore. I was in the forest for a few hours and didn’t meet anybody. I was completly on my own. The thought somewhat scared me but also pushed me further.

Around 7 pm I planed to give up and just setup my tent exactly where I was standing. I didn’t see any marks on trees in a while and wasn’t sure if I was following any path at all.  And then, like a miracle, I spot a proper road-sign telling me that it’s just 25 minute walking distance until the hut.

When I got to the hut it was closed. I was warned before that some huts wouldn’t open before May 1 so I wasn’t terribly disapponited. It would have been nice to have a dry bed for my completly wet self – but I wanted to have a adventure so no complaining. Plus there was nobody to complain to anyways.

Beautiful little tent next to a hut which does look like a witch-hut, doesn’t it?

Actually, this was the first tent I ever setup completly on my own. You can’t imagine how proud I was when I was finished. 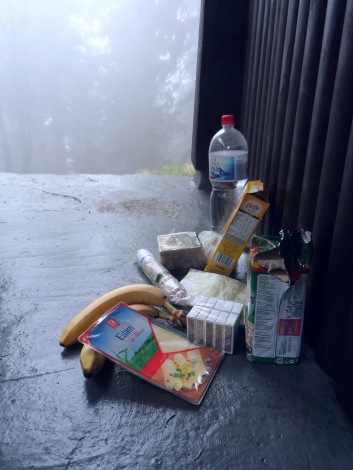 And then night came… and with night all the strange sounds. Something rustled around the tent, or was it just another drop of rain? Where these footsteps or just wind in the trees? Far down in the valley I could hear a train and some police siren but these were the only human made sounds around me. After all, human are the most dangerous animal of all. So I felt more safe than I did on many nights in some cities.  After I finally convinced myself to feel safe without anybody around, I heard a car coming closer and closer. I sat up at once and tried to figure out a strategy. When they come, could I run? To where? But could I fight?

Of course the car passed. I’m not sure if they even saw me. And if so, why would they even want to get into my tent?! Slowly my heartbeat cooled down to normal speed. Now I had time to realize where the real danger laid: it became colder and colder. I had a good tent and a good sleeping bag but still it was so, so cold. Maybe I was a little anxious, too. One reason or another, I kept waking up every few hours, listing to the rain and shivering in my sleeping bag.

The I-did-it! Morning after selfie.

When I woke up I first counted all my fingers and toes, tried to feel my nose and ears and convinced myself that my body was still fully working.

The morning was a foggy and rainy as the last day has been. I decided that one night in nature under this condidtions is enough adenture and slowly made my way down the mountain on a different path. 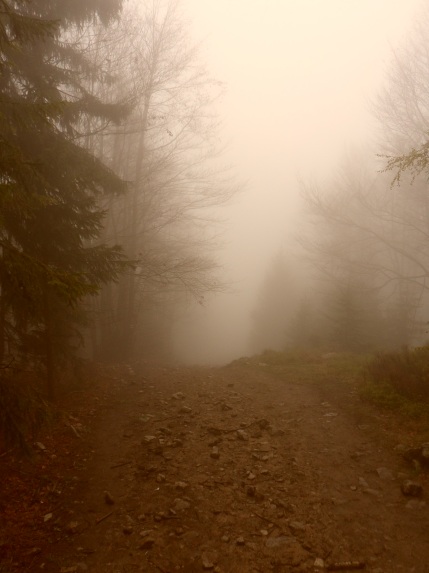 Sepia-filter to make the fog look a little more cozy.

But as I descended more and more the weather became better. Finally, almost down, the forest started to have colours again. 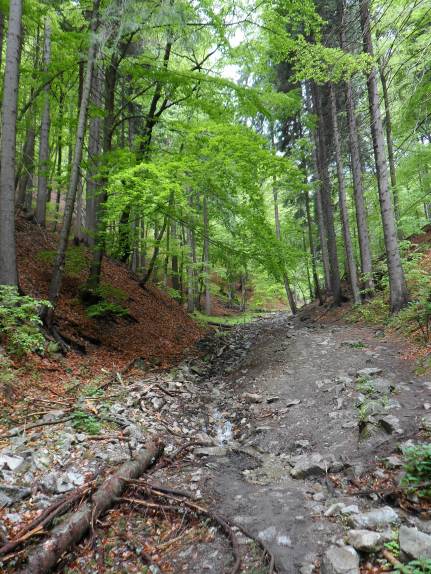 The forest opened to a beautiful little village in perfect sunday sunshine. Suddenly, the foggy world just a few meters above seemed unreal. Was it really that dark and grey? I thought while smelling delicious sunday meals served in green gardens.

But it was. My wet clothes and wet tent were perfect witnesses. Eventhough my legs are so, so sore today and I just loved to warm and comfortable bed I slept in, I’m going to try it again. But this time maybe in summer…

Tell me, what was the most into-the-wildish adventurous thing you ever did? And what are you planning to do?

p.s I’m about to go to a workaway host to learn a little more about Slovaks and Slovakia before the camerateam comes back next week.

4 thoughts on “Dare: One night alone in the Slovakian Forest.”